It’s easy to look at the campaign rhetoric during the previous 18 months and conclude that the next four years are going to be profoundly difficult for the vulnerable in our society. The reality is that every year is difficult for them. Most of the Founding Fathers were slaveholders. FDR interred tens of thousands of Japanese American citizens. Liberal and conservative presidents led a country that for decades allowed Jim Crow laws to remain in place and denied women the right to vote. JFK drug his feet on civil rights reform. Ronald Reagan’s policies on mental health led to an explosion in the number of homeless in our country. Bill Clinton ushered in the mass incarceration of young African Americans. Barack Obama has deported more undocumented immigrants than any president before him. If one is convinced that God’s heart is uniquely for those without a voice, without power, without recourse to justice, then there has never been a time in our nation’s history when the powers that be have been aligned fully with this passion of God’s. We believe God is uniquely concerned for the vulnerable: the refugee, the immigrant, the unborn and those born into economic hardship, the former mill worker struggling to find a way forward, and the young black man hoping to get home safely. Their desperation and fear is just as real and just as much God’s concern as the fear and worry that undocumented citizens and refugees feel. The recent election cycle has made this misalignment quite visible and visceral, but it has always been there. God is on the side of the vulnerable no matter the source of the vulnerability.

If one is convinced that God’s heart is uniquely for those without a voice, without power, without recourse to justice, then there has never been a time in our nation’s history when the powers that be have been aligned fully with this passion of God’s.

Three days after the 2016 election Steve Sherwood was glumly riding an exercise bike in the early morning hours, following three nights of poor sleep. Convinced that merely ranting about the election on social media wasn’t going to help, he hit upon an idea: “I’m just going to post a verse a day, for four years, with each one being about God’s concern for the poor and marginalized.” Arriving at George Fox University that Friday morning, where we both teach, we quickly decided that something like that would take some organization and that others might like access to those verses, too. With that, Praying for Justice: A Lectionary of Christian Concern (Barclay Press, 2017) was born.

The book begins on a rather odd date: January 20, 2017, Inauguration Day. It ends the day before the next Presidential Inauguration in 2021. Why tie this book to a specific period of time—a presidential term—instead of any four-year period? We believe there is something powerful in praying for specific people during specific times, and the vitriol of this particular campaign cycle has struck them as especially disconcerting. That is not to say that this book hasn’t been needed during previous presidential terms or won’t be needed in the future. It happens that we find ourselves near the beginning of a new President’s term with questions about how this President—indeed any President—will lead when it comes to the oppressed, the marginalized and the poor.

When we picture the vulnerable in our society, we think of  people of color, undocumented immigrants, victims of sexual assault or harassment, Syrian refugees, the unborn, and LGBT+ people. Reading the Bible, one quickly discovers that these specific groups are not mentioned, or at least not named with the same names we use today. Instead, one often encounters comments about widows and orphans, sojourners in your midst, the poor. In a sense, these are catch-all phrases for people lacking advocacy, power, or options. These were people vulnerable to the machinations of the wicked in the Bible. All of that is reflected in our biblical excerpts. It is appropriate to read into and expand these categories to include all of the vulnerable people in our present societal moment.

By focusing so fully upon verses and quotes that highlight issues of social justice, are we suggesting that this is all God cares about? What about salvation, doctrine, sexual morality? Let us be clear: the Bible indicates that God does care about all of those things, and much more. In choosing not to address them here, we are not suggesting that these are not worthy topics of concern. But, let us also be clear that in the Bible there is no cluster of moral issues that God expresses more concern for than how we treat one another economically, socially, communally. The Bible places issues of social compassion and justice at the moral and ethical center of its teaching, and we think that Christians likewise need to center their moral and ethical actions around these concerns.

The Bible places issues of social compassion and justice at the moral and ethical center of its teaching, and we think that Christians likewise need to center their moral and ethical actions around these concerns.

Finally, this book is a call to action. As German pastor and theologian Dietrich Bonhoeffer, writing to Christians in Nazi Germany, and Martin Luther King, Jr., writing to Christian pastors from a jail cell in Birmingham, Alabama, both admonished, injustice and oppression can be served by the passivity of otherwise good people, if they refuse to act or speak up in the face of actions by those who abuse power. There is never a time for Christians to sit and trust that others will take care of people on the margins of our society. Our prayer is that the next four years will be a time during which Christians from all denominational backgrounds and political parties will not content themselves with mere social media activism or personal piety, but will, rather, act. Act often. Act publicly. Act sacrificially. Act with courage and compassion. Act as if it matters, because it does.

R. Anderson Campbell is assistant professor of Christian studies at George Fox University where he teaches courses in theology and vocation.

Steve Sherwood is associate professor of Christian Studies at George Fox University where he teaches courses in Bible, theology, and youth ministry.

100% of the net proceeds of Praying for Justice go to Church World Service to aid in their work resettling refugees and advocating for immigrant and refugee rights in the United States. The Time Is Now: End the Separation of Families 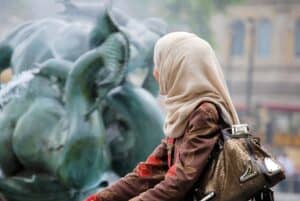 On June 10, 2017, a group called ACT! for America is planning anti-Muslim “March Against Sharia” protests in 22 major cities across the United States. This conservative group expresses their prejudice against Muslims with typical fear-mongering, outlandish claims about an Islamic conspiracy to take over America, claiming that “tens of thousands of Islamic militants now reside in America operating in sleeper cells, attending our colleges and universities, even infiltrating our government;” and asserting that radicalized Muslims “have infiltrated us at the CIA, at the FBI, at the Pentagon, at the State Department.”