Understanding the Promised Land of the Bible 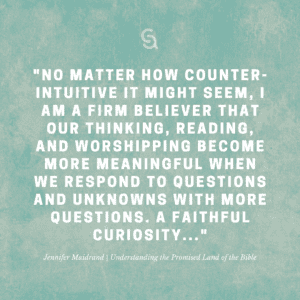 “God blesses those who bless Israel.”

“The land and people of Israel are blessed.”

“Israel is the Promised Land of the Bible being fulfilled today.”

If you identify as Christian, it is likely that you have heard these claims at some point or another. It is not uncommon for churches, pastors, social groups, and political consortiums to pledge their allegiance to Israel and cite their support as an inherently biblical practice. And for many Christians in the Western world, viewing Israel as the Promised Land is common, shared language. Many of us learn matter-of-factly in our churches and Bible lessons that God promised the land of Canaan to the people of Israel and that such a promise extends into our world today.

But where do these beliefs come from? And do the biblical texts they are based on say what we think they do? In what follows, I invite you to explore these questions with me.

In light of the recent uprisings and surging geo-political tensions in Israel-Palestine, many have begun to question what they really know about the land of the Bible and how it ought to be divided. As someone who has spent significant time in Israel-Palestine and invested my career in Christian and Jewish dialogue on the Bible and its lands, I wrestle with these questions daily.

Most common conceptions of the “Promised Land” are rooted in the stories of Abraham and his descendants—that they were promised land, progeny, and God’s favor, and that those promises were fulfilled in biblical times. An understanding that God historically favored the people of Israel (which we now understand to be the Jewish people), and that such a predilection remains true today, is also prominent among many Christian communities.

And although language of promise pertaining to the land of Canaan is present throughout the Hebrew Bible, we should take pause when we encounter claims regarding both the historic fulfillment of those promises and the authority they ought to hold in Israel-Palestine today. Though these beliefs may seem harmless, they influence policy-making that bears brutal consequences on those who dwell in the land, and most acutely on Palestinians in the West Bank and Gaza.

A popular interpretation of Genesis 12:1-3 is that God is speaking of the nation that will become Israel and, subsequently, that all who “bless” Israel will be blessed themselves. Among American Evangelicals, this belief often encompasses both an individual and national relationship, maintaining that America will stay in God’s good graces if it supports Israel.[1]These claims, however, rely on contemporary understandings of nation-states and assume that the promises attributed to Abram are viable for modern Israel as well.

In the world of the Bible, a nation is a far more localized concept than we might imagine, and, for Israel in particular, many scholars speculate that it is unlikely that Israel moved beyond its conceptualized nation-state into actualization. So although it might feel natural to read Bible stories as scenes from history, we might better approach the complexity of biblical texts by keeping in mind that they were written by communities seeking to make sense of their identity and relationship to the Divine, and that not all of their hopes and ideals came to fruition.

Another popular understanding of Israel as the Promised Land comes from Genesis 17, where God’s covenant with Abraham and his offspring is affirmed, and God promises to be the God of Abraham’s offspring and gift them the land of Canaan for “a perpetual holding.”

Since the 19th century, British Evangelical Christians interpreted this verse to mean that God promised the land of Canaan (contemporary Israel-Palestine) to the Jewish people for eternity.[2] This understanding, however, does not take into consideration the loose use of the term “forever” in the Hebrew Bible, and the contingencies upon which these claims often rested.

When biblical authors asserted that blessings or curses or rulers would last indefinitely, their language should almost always be understood as hyperbolic. King David’s throne does not endure forever nor does Israel remain in the land forever—nations comingle and conquer; Israel deviates from Yahweh; and God changes God’s mind often.

And regarding both the promise and conquest narratives in the Bible, biblical scholars widely understand those articulations of land claims as written by later authors and influenced by later political concerns and motivations.

In other words, it’s likely that the communities that wrote these scriptures containing God’s promises of land and abundance were already in the land (or hoping to dwell in it soon) and were seeking to explain their present by telling stories about the past. These texts are not predicting the future but rather are narrating the past, or at least a version of Israel’s past that they choose to tell.

If we understand the fulfillment of the biblical Promised Land as a clearly defined event in history, we also run into some issues when we take a closer look at the varying biblical accounts that reference this promise and its implementation.

In Deuteronomy, we see that Israel’s future inhabitance of the land of Canaan will be dependent on their obedience to Yahweh and that they can lose the land if they are unfaithful.[3] Israel is further warned by God that the land will “vomit out” its inhabitants if they do not follow God’s commandments.[4] And despite God’s promise to Abraham that his descendants will be given land and become a nation, there remains a persistent theme throughout the Hebrew scriptures that no one owns the land and that dwelling on it is a contingent gift from Yahweh.

Lastly, we see in the conquest narratives that Canaan is conquered both all at once and over time, and sometimes is not conquered at all.[5] We find in the biblical text less of an emphasis on an enduring promise, and far more of an insistence to live faithfully as a community of God’s people.

Although many of us have learned various explanations regarding why Israel is a holy or promised land, or why it ought to receive the unwavering support of Christians worldwide, it is likely that the inconsistencies in biblical stories regarding the promise and conquest of biblical Israel are less familiar. So, what are we to do when we encounter biblical texts that are not always in harmony with theologies, and sometimes political ideologies, that we have learned about Israel?

No matter how counter-intuitive it might seem, I am a firm believer that our thinking, reading, and worshipping become more meaningful when we respond to questions and unknowns with more questions. A faithful curiosity, if you will.

Just as there are many parts of the Bible that ought to be read with an understanding of their ancient contexts (agricultural sacrifices, communal rules, imperial politics, etc.), the patriarchal promises must be as well. As Christians who seek to be in solidarity with Jewish and Palestinian siblings, we must nuance our understandings of biblical history and the role of biblical narratives in our world today.

We do not double-down on Hebrew commandments regarding agricultural ethics or neighborly conduct, nor do we attempt to literally align the prophet’s pointed warnings with our own nations and provinces. So why do we do this when it comes to Israel? When we attempt to draw direct lines of connection from the Bible to geo-political contexts rife with oppression, we lose sight of the kernels of justice and mercy that these ancient stories bear.

[1] This support usually entails prayer and vocal support, but often materializes in the form of financial support as well. One of the anomalies of Evangelical support of Israel that often goes unexamined is that while proclaiming support and often love of the Jewish people, it is contingent on the theological belief that Jewish people who do not accept Jesus as the messiah will perish during end times. The contradiction of such beliefs is strikingly clear in lists such as this one, which both claims the Jewish people as God’s chosen/promised people and depicts their theology as deviant yet necessary to actualize a particular Christian eschatological belief.

[2] A troubling yet important aspect of this belief’s history is its anti-Semitic origins wherein British Christians conceptualized Palestine as a solution to “the Jewish problem”—as place where Europe could conveniently relocate its unwanted Jewish populations.

[3] See Deut. 6:18; 8:1 and Deut. 4:26; 28:63; 30:18; Josh. 23:16. Additionally, Christian biblical interpretation has historically been rife with anti-Semitism and supersessionism, often associating the Israel of the Hebrew Bible with sin and incompletion and choosing to interpret Christians as the rightful recipients of God’s promises to Israel. Such interpretations are another example of the self-seeking motives that are often embedded in Christian support or love of Israel.

[5] In the Bible, we also see Israel inconsistently mixing with and adopting the religious and communal practices of the native inhabitants of the land, and observe that the borders of the land of Canaan are drawn inconsistently.

Jennifer Maidrand is a Ph.D. candidate at Drew University in the Bible and Cultures program. Her research interests are in Hebrew Bible, Womanist & Feminist Hermeneutics, Religion & the Environment, Archaeology, and Geo-politics of Israel/Palestine. She is a member of the UCC Church and is committed to fostering interfaith and intercultural community education and dialogue around sacred texts, the earth, and politics. The Dangers of White Evangelical Nostalgia

What is it about white evangelicals that makes us long for an earlier Golden Age? The problem is not new. Over two millennia ago, the author of Ecclesiastes had to admonish, “Do not say, ‘Why were the old days better than these?’”

A dangerous nostalgia is washing over much of the white evangelical world, and the election of Donald Trump as 45th president of the United States is one of the consequences.

“I think I’ve changed my mind. I don’t think we should do this.” I bit my lip and put my hands in my pockets.

“Don’t be nervous. Be proud. This is who we are,” my husband said.