Walking Into the Resistance Injustice is not okay. In recent years, people have been waking up, some for the first time, to the reality that systems do not work for everyone, that elections are important, and that leadership is needed to unite a divided people. This awareness, while deeply grievous, is good, because joining the good work necessary to change systems requires people.

As a Christian, I am driven by my love for Christ and his love for others. My rootedness to the teachings of the Bible and the importance of living out what it says is central to my identity. It is both my faith and my practice. I also grew up in the church, and in addition to my spiritual formation, I was terrific at Sunday school. Being a good Sunday school kid not only meant you knew your way around the Bible, but you also caught and practiced all the added on, cultural expectations of the church. I was trained to love God, love others, and be a good Pharisee.

I knew what behaviors and attitudes were and were not acceptable in the church. I was not only good at knowing the rules, but I excelled at following them. I share this because I knew then as much as I know now that mixing politics and the church is a big no-no. You could be a little political by identifying with one political party and working to reverse Roe v. Wade and gay marriage, but any other political thought or idea could lead to becoming the community pariah.

I gave no thought to that cultural rule before I became a teacher, before I moved into a community impacted by poverty, racism, and immigration status, before political issues and elected power made a difference in the health and wellness of my community. Before all that, the system worked for me and those I loved. After, the system still worked for me, but I could see how it was perpetuating hardship with little way out for my church community, neighbors, and friends. I could not deny that reality. Change needed to happen.

As I started to share what I was seeing and to tell the truth of all I was learning, I was getting closer and closer to that forbidden line—don’t mix politics with the church. You can love the poor by meeting their immediate needs (mercy), you can even look more deeply into the problems and provide a social or community development response (social justice), but do not get political. Do not speak against the systems that keep the status quo in play. Do not cross that forbidden road.

It was much like the journey of the Samaritan along the Jericho Road, who crossed over to help minister to the half-dead, beaten man, but after several years of helping hurting people I realized it’s not okay to have a road that perpetuates the beating, robbing, and potential death of its travelers.

If I was going to follow God’s greatest commandment to love him with all my heart, all my soul, all my strength, and all my mind, as well as love my neighbor as myself, it was not okay if my family and I were good, and my neighbor wasn’t. I realized that bold, radical love was not simply crossing a forbidden line but working to remove it entirely so that nothing stood in the way of working toward justice.

Somewhere in the journey of loving my neighbors, I had become an activist. Initial steps into that label honestly seemed foreign and a little uncomfortable. Having not known any activists in my early formation made it seem far off—the term connoted images of people that seemed extreme. I had moved, however, from silent observer of my community’s stories to fellow steward. Stewarding means you assume or take some responsibility, ensuring that something gets done about a situation.

Taking some responsibility did not mean I was taking over; ensuring something got done didn’t mean doing it my way. It simply meant that I needed to decide: Was I in the work or outside of it? Was I sharing and responding appropriately to the pain alongside my community or simply making notes about it and relaying it as a commentator?

I chose to be all in.

Not everyone is going to make choices like I did—that is not the point. The point is, as Christians who care about social justice, moving from the sidelines to join the sacred work of faith-rooted activism needs to be intentional. However long your season to steward is, it needs to be stewarded well. It is not enough to simply become dissatisfied and commentate on the status quo. We must move toward substantive, restorative action that moves against the current of conformity, demanding a better, more just way.

The gospel, or good news, of Christ is a restorative work. At its center is God’s heart for justice. God’s justice, satisfied through Christ’s salvific work, gives humanity a way back to God. The liberating power of the gospel puts us in right relationship with God, and as agents of his salt and light in the world, he invites us to join him in reconciling all things to himself. This restoration of all things goes well beyond the spiritual and encompasses a commitment to holistic restoration including emotional, mental, and physical restoration. This is the good, restorative work that we are called to join Christ in doing.

Jesus came to earth to shake things up, to introduce a new way forward, to usher in the kingdom of God. At the beginning of his earthly ministry, he went to the synagogue in Nazareth where he grew up. He stood up and read a prophecy from Isaiah that described his purpose in the world: “The Spirit of the Lord is on me, because he has anointed me to proclaim good news to the poor. He has sent me to proclaim freedom for the prisoners and recovery of sight for the blind, to set the oppressed free” (Luke 4:18). He then said, “Today this scripture is fulfilled in your hearing” (Luke 4:21).

Jesus came with purpose, to proclaim good news and freedom for the most oppressed in society. He came to heal some from physical blindness, and to reveal himself and his truth to people who were and remain blinded by lies and darkness. His reconciliation work of salvation was the starting point.

His radical message of a new kingdom defied power, religious practices, and superiority. Evidenced in humbly coming to earth, he demonstrated for us a new way forward, weaving together the justice of God with the sacrificial love of Christ. We see in 1 John 3:18 that it is not enough to simply love in words and speech, but we must also love with actions and in truth.

Being able to see pain, brokenness, injustice, and oppression is a grace; to tell its truth is transformative. Once we see the truth, we can accept our commission to join Jesus in his ongoing redemptive, restorative work. This restorative kingdom justice work gives birth to and compels us toward honest action that resists oppression and injustice at every level, especially the oppression of the vulnerable.

Faith-rooted activism allows our commitment of love to be on full display. This long, restorative, justice work is the long work of the kingdom. Whether it is the justice of God toward individual, social, or structural entities, we join with Christ in his redemptive work of restoration, not just in word. Our living, public witness to the wholeness of God’s restoration is the good, necessary work of the people of God. Honest action that is founded on the justice of God, demonstrated in the love of Christ, and practiced by the people of God compels us to not stay silent in the face of injustice but instead to speak boldly against oppression.

Taken from Join the Resistance by Michelle Ferrigno Warren. © 2022 by Michelle C. Warren. Used by permission of InterVarsity Press.

Michelle Ferrigno Warren is the president and CEO of Virago Strategies, a consulting group that provides strategic direction and project management for civic engagement campaigns alongside communities impacted by racial and economic injustice. With policy expertise in economic justice and human service issues, she has served as advocacy and strategic engagement director for the Christian Community Development Association and done coalition work with the National Immigration Forum. She is the author of The Power of Proximity and Join the Resistance. By Cheryl Miller and Shannon Deer
Employers who hire overcomers often gain a remarkably resilient employee who can change their business for the better. 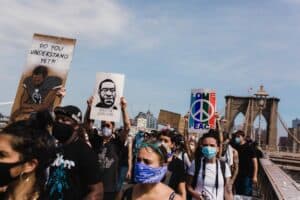